A princess… a kingdom… a destiny.

Here's the teaser for Apoidea (to watch in HD -most recommended-, click here). 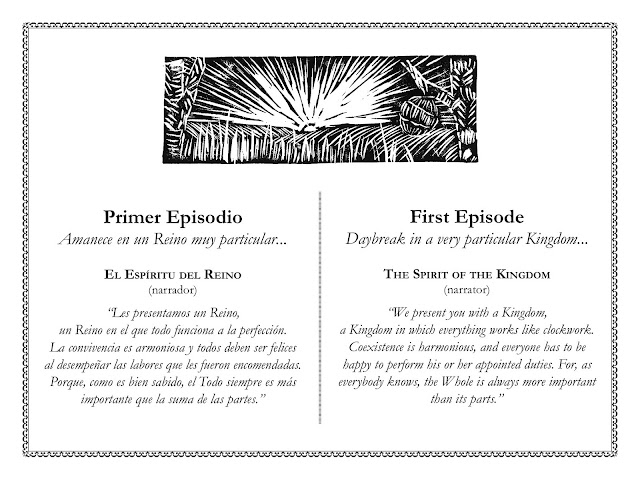 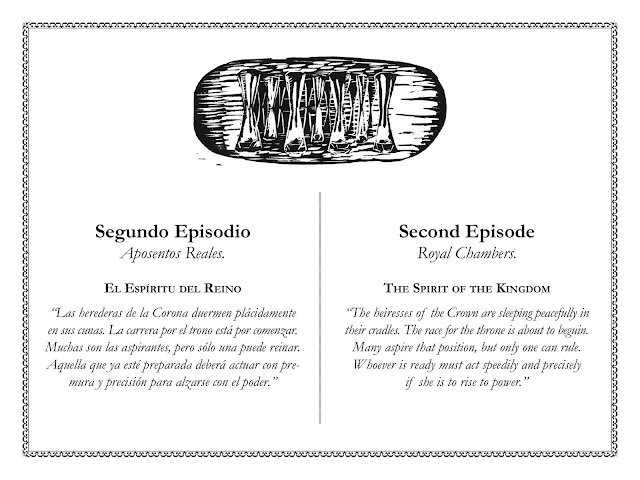 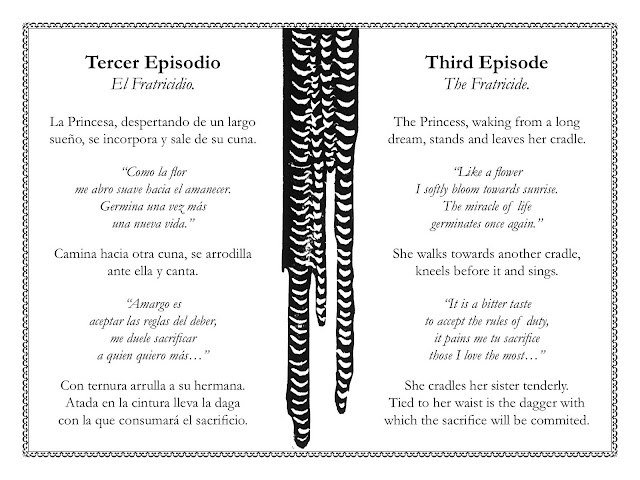 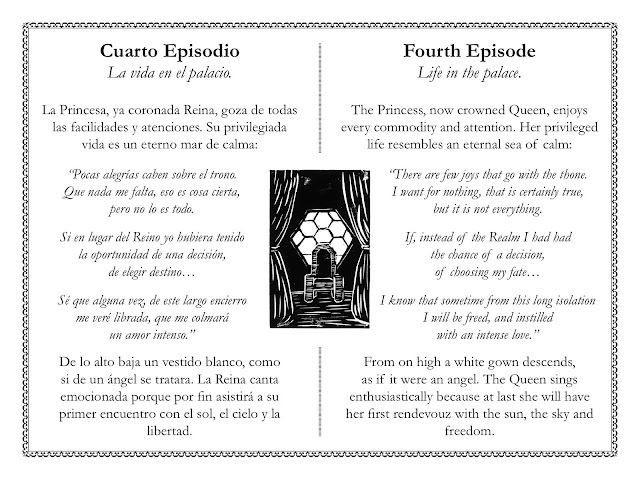 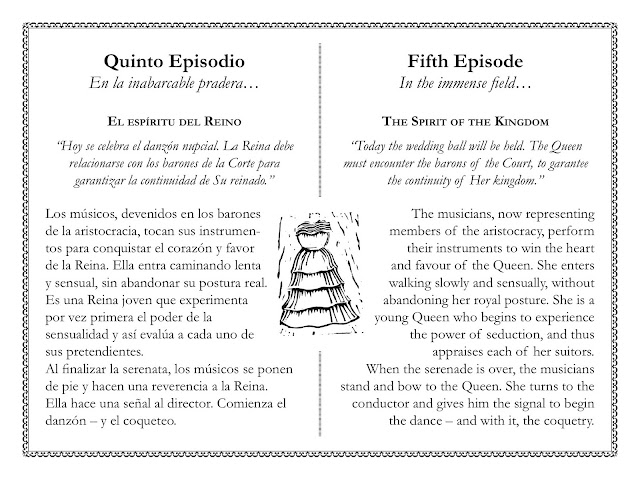 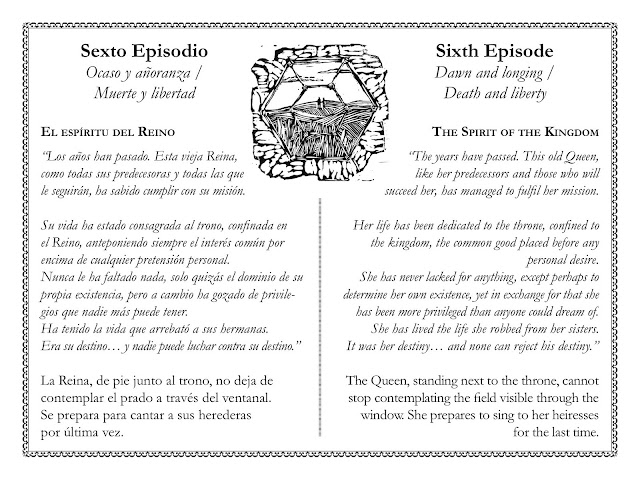 The opera describes the tragedy of a queen who, even before she was born, finds herself predestined to take on a mission that she has not chosen. Cloistered inside her palace, though provided with every possible privilege, she must give birth and guarantee the continuity of her descendants and preserve social order.
Apoidea is the name of a superfamily within the hymnoptera, to which bees belong. The plot of the opera reflects what actually occurs in Nature, detailing the most meaningful stages of a queen bee's life, a life that has all the ingredients of a tragedy.
As soon as she is born, the princess must kill her sisters to rise to the throne. As macabre as it may seem, she is no less a victim as her choice is to kill or be killed.
Thus begins her life as queen, attended constantly by her subjects but still trapped within a narrow confinement, from which she escapes only once in her lifetime, when it is her time to mate. She mates after a single wedding dance, as a result of which she will give birth till the end of her days. And when this happens, nothing in her life will have made a difference, as one of her daughters will occupy the throne that she will leave and history will repeat itself over and over as it has since time immemorial.
Posted by Apoidea - Breve ópera hexagonal at 12:49 PM 0 comments

About the script – the tragedy of a queen

In writing Apoidea, I had the opportunity to express an idea that has been on my mind for a long time: up to what point does occupying the throne in any of the still existing kingdoms in western societies remain a blessing and not become a burden?

It is clear that the members of royal families have so many of their problems solved. They enjoy all kinds of privileges, unattainable for their subjects, they will never lack for anything, and all this is in exchange for… nothing, for the simple fact of being born. Yet on re-examination, a prince or princess can only aspire to be a king or a queen. From the moment they are born, their destinies are pre-ordained, while the rest of us , however, are born with everything to do and so are responsible for our destiny and for the result of our decisions. Thus, it can be reasoned that the throne does have a price and this is not cheap, as it is nothing other than liberty.

To illustrate this idea I thought it appropriate to turn to nature, and more precisely to Apoidea, the family of insects to which bees belong. It is a fact that the life of a queen bee has all the elements of a tragedy. Unlike those of the rest of her working sisters, queen bee grubs are fed with royal jelly. The first to be born faces the difficult task of killing the rest of the candidates to the throne, her own sisters. It has no choice, to kill or to die, and this first forced action makes her a queen.

Then, at some point in the future, the point of reproducing to guarantee the continuity of the hive will arrive. It will be the first and possibly the last time that the queen leaves the hive for her a marital flight to mate with the drones who will die after copulation. From that moment on, until her death, the queen bee does nothing but lay eggs, an enormous quantity, each and every day of her remaining long life.

It is true that the queen will lack for nothing, she will not make the slightest effort even to survive as her working bee sisters will feed her, yet her existence will be limited to that single reproductive mission that she must accomplish while imprisoned. The workers, on the other hand, have a much shorter life span, yet throughout their lives, they carry out all the tasks of the hive, from nursing and feeding the larvae to cleaning and preserving the hive, to flying out to collect pollen from flowers to produce honey. They too have little choice, but which life is preferable? That of a worker, a brief one but that includes knowledge of the world beyond the confines of the hive and its roles as nurse or cleaner, or the life of a queen, though prolonged is restricted to just one mission – to give birth over and over again until she dies?
Perhaps the script for this opera is just a trivial comfort for one who knows he'll never become king and will have to continue fighting day by day to build his reality and his future. But I think that, had I a choice, I would choose to continue being the sole maker of my destiny. I am happy that no blue blood runs through my veins. If I am ever reborn as a bee, I hope it will be as a worker.

Mexican influences and other musical factors in Apoidea

When my friend Omar Rojas sent me the commission to write a short opera, the idea fired my enthusiasm. The opera was to be included in celebrations of the Bicentenary of the Mexican Independence that would be held in Brno, Czech Republic, and performed with his own short opera, "La Llorona". The guidelines were very precise: “a short work for chamber ensemble and mezzo–soprano.” I had two further conditions myself: I wanted the work to have some relation with death, as its premiere, programmed for the 2nd of November, coincided with the Mexican festival of the Day of the Dead. And secondly, in some way, I wanted the performers to play a part in the story.

My good friend (in fact my roommate, at the time) Germán Panarisi came up with the idea of narrating the life of a queen who obliged to kill her sisters to gain the throne, inspired by the life of a queen bee. After reviewing the different stages of the life of a queen bee, a solution for the second condition came to mind: the wedding flight would become a wedding dance, the barons would be portrayed by the musicians, each performing a solo when his turn to dance came. And so, after a few weeks of long discussions over a beer or two, the script was practically settled.

Finally, it was time to write the music. I thought, as it was) to be performed in a country so different in terms of culture and music from mine, it would be interesting to evoke the music of Mexico.

The tragedy of Apoidea tells the story of a queen whose rank is envied and desired by everyone when, in reality, it is a 'honeyed prison '. To a great extent, the power of this opera resides in this being a universal idea that 'resonates' in all of us.

The music, on the other hand, has a clear Latin-American character, specifically a Mexican one, resulting from a number of factors. The first elements responsible for this are the instruments accompanying the mezzosoprano: the sextet of flute, clarinet, guitar, violin, cello and percussions (shakers, guiro, claves, vibraphone). Together, they construct a number of rhythmic patterns and timbric combinations that immediately recall the sounds of these regions. You can hear the squeaky violin of the Calentan son, the strumming of the Jarocho guitar, the clave of the son, the pecking of the mariachi guitarrón on the cello, the high-pitched flute of a mambo… even the nuptial flight of the queen bee for Apoidea becomes a nuptial ‘Danzón’.

As an example, 'Introduction' features a clearly Mexican motif in the flute and clarinet, which is answered by the violin. The guitar's strumming is counterpointed by the pizzicatti of the cello, a combination from which the 'sesquialtera' comes, the mixing of 3/4 and 6/8 meters, so distinctive of this music. The vibraphone, at the same time, evokes the marimba of the state of Chiapas.

Within the score of Apoidea there are many musical curiosities. There are sections that recall Moncayo's 'Huapango', while other sections recall 'El Son de la Negra'. The melodic motif for 'The Fratricide' is a literal transcription of the piping sound produced by queen bee when she is about to fight for the power of the hive. This pipe, a two-second pulse followed by a series of quarter-second toots, will later be heard again in 'Dawn', on this second occasion having a more relaxed temperament.

Recurrent musical motifs serve as raw material for the construction of the opera. Of these, the leitmotif of the Queen (a unstable, six note chromatic line) is by far the most important. It appears most evidently during 'The Lament’, although it is also present in 'A Sea of Calm', 'The Wedding Danzon' and slightly modified, in 'Lullaby'.

I invite you then to listen to Apoidea, discover its secrets and be transported to these lands. In my own version of the old saying, "Hearing is believing". 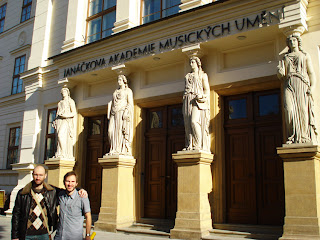 Germán and Jomi in front of JAMU, in Brno, Czech Republic, where the premiere of Apoidea took place

Since 2003 José Miguel Delgado (Mexico, 1977), who previously studied industrial design, has been concentrating on music. As well as being a composer of theatrical, traditional and electro-acoustic music, Delgado is involved with sound design. Among his interests is collaborating with artists of different disciplines.
José Miguel studied in the Centre for Studies and Research in Music (CIEM) and holds an LTCL with distinction in music composition from Trinity College of London. In 2010 his orchestral piece 'Nuevo Canto a México' was chosen to be the oficial musical theme of the Bicentenary of the Independence of Mexico. www.jomidelgado.com

Germán A. Panarisi (Argentina, 1981) was awarded a grant to study Economics at Universidad Carlos III de Madrid in 1999, which led him to live in Spain from that year to the present. He combined his studies with his vocation for cinema. His first screenplay “Minesweeper” got the jury´s and most voted screenplay award at Magonia Pictures contest (2002). He is also founder of the Latin American Student and Cinematographic Associations at Universidad Carlos III. A baccalaureate in Economics he started a degree on Media Studies. He has directed several short films and is currently working at the Spanish National Radio as well as in the developing of many other projects, such as short films and movies and TV scripts.

Posted by Apoidea - Breve ópera hexagonal at 6:22 AM 0 comments